CHELSEA PENSIONERS RING IN THE FESTIVE SEASON WITH TASTY CHEESE 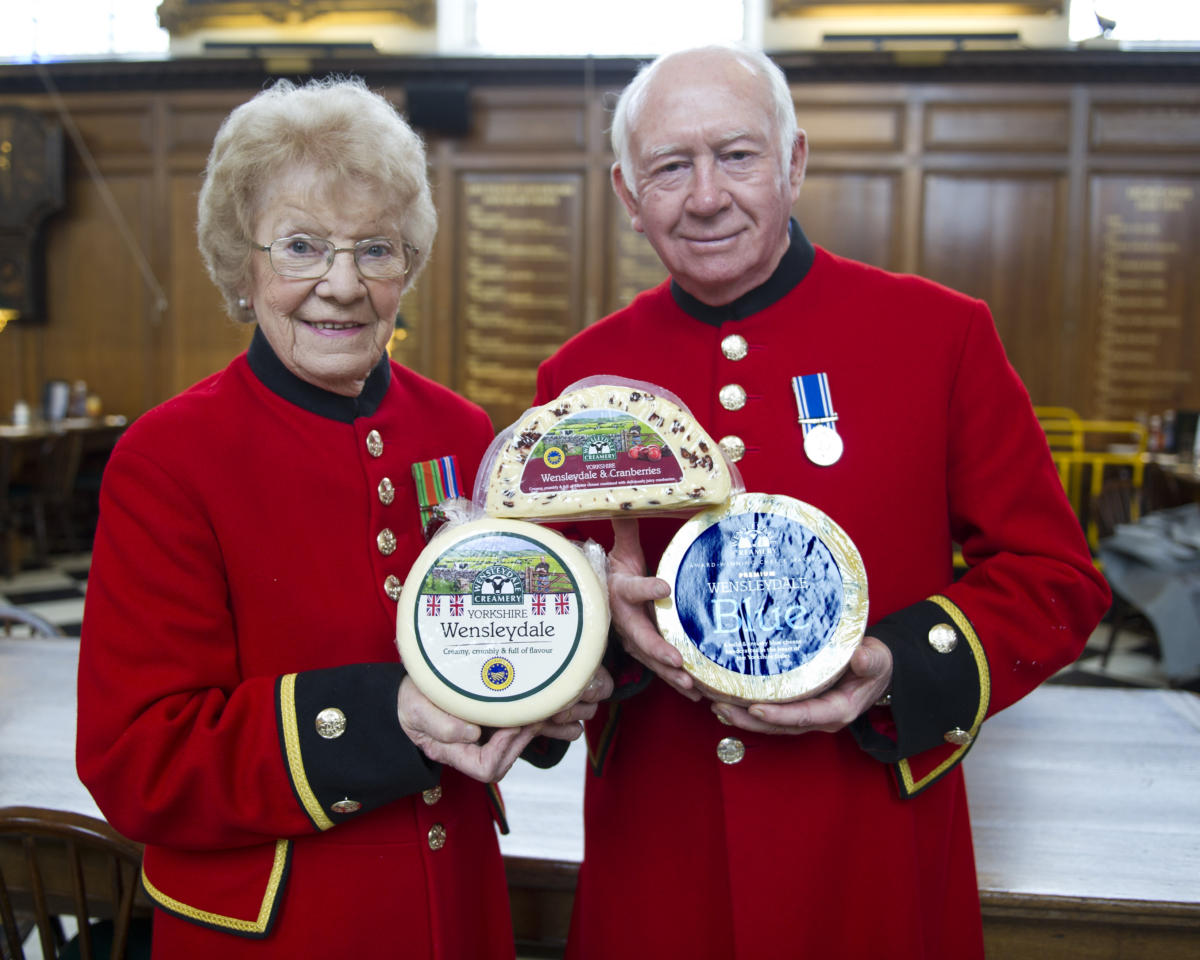 The Chelsea Pensioners enjoyed a taste of Yorkshire as The Wensleydale Creamery took centre stage at the annual Ceremony of the Christmas Cheeses at the Royal Hospital Chelsea in London today.

The centuries old tradition began in 1692 when the Royal Hospital asked a local cheesemonger to provide the Pensioners with cheese as a Christmas treat. Cheese-makers across the UK have continued this tradition ever since.

The Chelsea Pensioners were joined by The Military Wives Choir who were the guests of honour at this year’s Ceremony. The Choir delighted the Pensioners with their rendition of Christmas classics Winter Wonderland and Jingle Bells.

Ash Amirahmadi, chairman of The Dairy Council, said: “The Ceremony of the Christmas Cheeses is one of the dairy industry’s most treasured events. It is a delight to be kicking off the festive season with such a joyful and colourful occasion.

“Cheese-makers from across the country have once again done us proud by donating an outstanding 246kg of fine quality British cheese.

“Cheese and dairy products represent a very important part of the veterans’ diet and it has been great to celebrate this with the Chelsea Pensioners and the Military Wives Choir today.”

Aged 92, Mary joined the Auxilliary Territorial Service in January 1942 and was stationed at Aldermaston and then Hounslow. She left in September 1945 having served for three years. Mary got married in 1943 to her first husband who was a member of the Welsh Guards Band. She had two sons one of whom was a Colonel in the Army Catering Corps and one who was a Warrant Officer in the Royal Engineers.

Mary joined the Royal Hospital in January of this year and has had a busy and enjoyable first year as a Chelsea Pensioner living in Long Ward Four and attending many events.

Mary said: “The cheese ceremony is a great day for us all at the Royal Hospital and we are delighted that Military Wives Choir have joined us in this year’s celebrations.

“Cheese has been handed out in rations since the First World War and has always been a favourite among British soldiers. I am extremely proud to be representing the Chelsea Pensioners today, we cannot thank the cheese-makers enough for their generous donations.”

Chelsea Pensioner John Morris also took part in the celebrations. Joining the Royal Hospital in 2013, John enlisted at Liverpool in 1957 where he joined the Queen’s Bay 2nd Queen’s Dragoon Guards (QDG). John was then posted to Dusseldorf, Germany, where he continued to serve with the band and was promoted to the rank of Lance Corporal. He left the army in 1960 after 3 years’ service.

John added: “The military is known for its traditions, but the cheese ceremony is one of my favourites.”