X
This site uses cookies to provide and improve your shopping experience. If you want to benefit from this improved service, please opt-in.
More Info
Accept Cookies
Discover our latest Special Offers with FREE Delivery when you spend over £50
Latest News, Events and Recipes from the Wensleydale Creamery | Wensleydale BlogBlogThe secret to Wensleydale Blue
Menu
Blog, Cheese, Wensleydale Blue

The secret to Wensleydale Blue

A true delicacy, inside the natural rind of the cheese, a close textured, creamy blue cheese with a delicate mellow, yet full flavour, which is notably not strong or harsh is revealed.

Wensleydale Blue is steeped in heritage & provenance; it represents the original, matured Wensleydale cheese that was made throughout Wensleydale by the Cistercian monks when they first settled in the dale in 1150.  Due to the conditions under which it was made and stored, the cheese would have naturally ‘blued’.

Today, award-winning Wensleydale Blue is handcrafted at the Wensleydale Creamery, in the heart of the Yorkshire Dales to a traditional recipe using milk from local farms, and the Creamery’s unique cheesemaking starter cultures, to guarantee is quality & authenticity.

Blue mould spores (Penicillium roqueforti) are added to the milk during the cheesemaking process.  The cheese is lightly pressed before being bound in a muslin bandage, and transferred to a special maturing room akin to a farmhouse or monastery cellar; dark, cool & moist, to age and mature on open shelves. Careful control of the temperature and humidity of this room is crucial to the correct development, ageing and blue mould development of the cheese.  The cheese is turned regularly and after 1-2 weeks the cheese is pierced to facilitate the blue mould development.  Piercing the cheese allows air to come into contact with the blue mould spores that were added at the start of the cheesemaking process, and so the maturation and blue veining of the cheese begins to develop.  This activity also changes the texture of the cheese too – it develops from being chalky and crumbly to a beautifully creamy texture.

Our skilled Cheesemakers and Cheese Grader keep a careful eye on the cheese throughout the entire cheese-making & maturing process.  At around 8 weeks the cheese is usually perfect for sale and to eat.

The quality of the cheese is endorsed by its award-winning status, most notably being awarded Supreme Champion at the British Cheese Awards 2012.

The back of the cheese iron (a tool used to check the cheese) will not be shiny ‘clean’ like we would expect with a Yorkshire Wensleydale cheese.

There should be a trace / covering of fat – which is a good sign!  This shows that the cheese is breaking down to create a beautifully creamy texture.  The blue veining should be developed and evenly distributed throughout the cheese. A mushroom type aroma may be detected.

Enjoy with oatcakes and red onion marmalade, crisp grapes and slices of pear.  A fine port, Malbec or Merlot is perfect for partnering Wensleydale Blue. 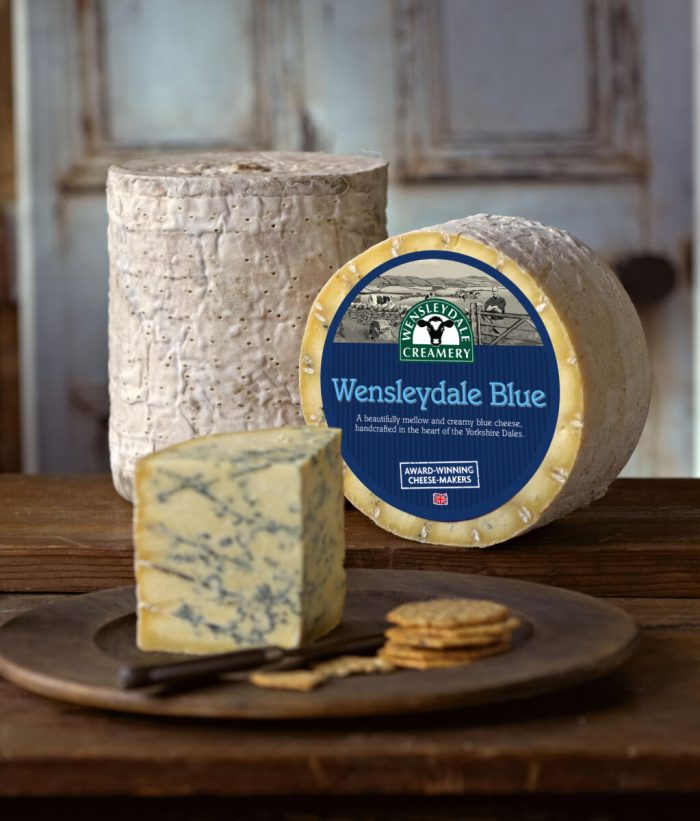