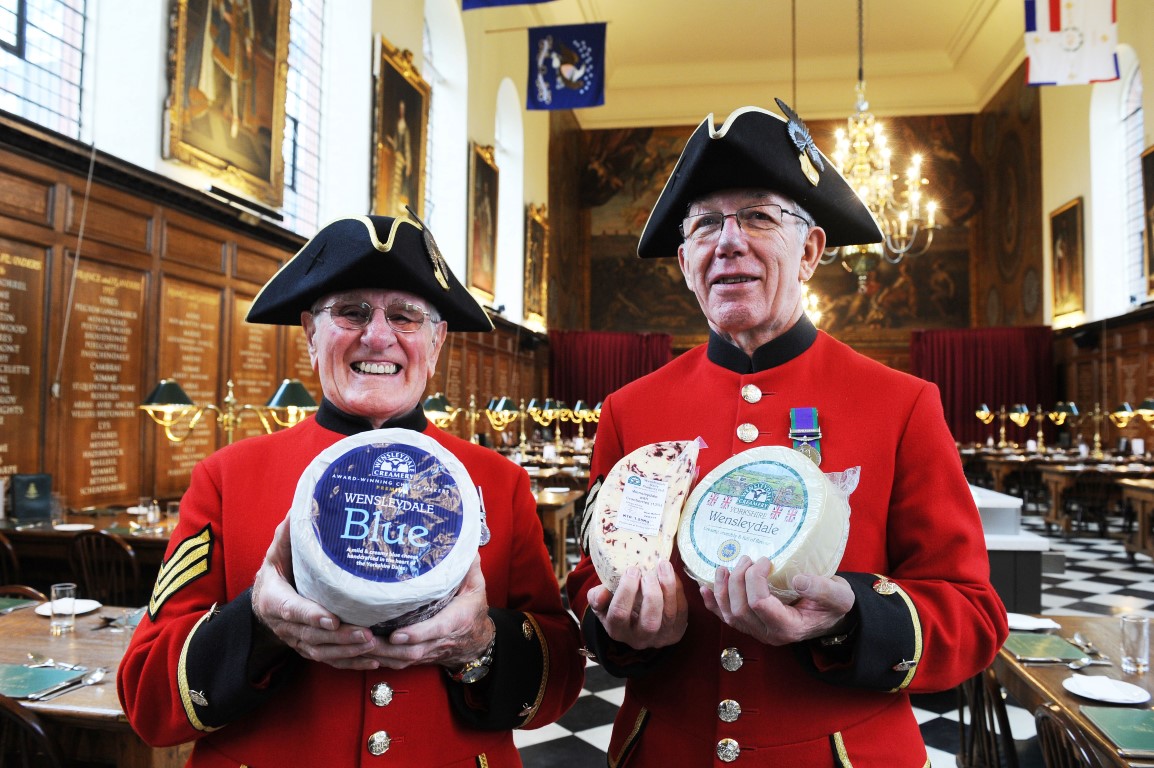 London, 2nd December 2015: The Chelsea Pensioners enjoyed a taste of North Yorkshire as Wensleydale Creamery cheese was at the centre of the annual Ceremony of the Christmas Cheeses.

Dating back over 300 years, the Centuries-old tradition began in 1692 when the Royal Hospital asked a local cheesemonger to provide the Pensioners with cheese as a tasty Christmas treat. Cheesemakers across the country have continued this tradition ever since.

Cheese, however, was not the only thing that brought a smile to the Pensioners’ faces. Singing sensation and 2012 Britain’s Got Talent runner-up Charlotte Jaconelli joined the veterans in this celebration of British cheese, delighting the Pensioners with her rendition of Pie Jesu and I Could Have Danced All Night from hit musical My Fair Lady.

“British Cheesemakers from across the country have once again done us proud by donating an outstanding 269kg of fine quality, nutritious and tasty cheeses to pay tribute to the heroism and sacrifice of our war veterans.

“Accompanied by the magnificent Countess of Wessex’s String Orchestra, our guest of honour Charlotte Jaconelli did a beautiful job in bringing a bit of festive joy to the day – her performance was truly magical.”

Among the Pensioners taking part in the ceremony today was Derek Walters BEM.

Derek joined the Royal Army Service Corps in 1952 as a National Serviceman.  The majority of his time was spent in Egypt with the Middle East Land Force.  Derek was awarded the British Empire Medal in 1982 for his work in the setting up of the British Army of the Rhine Freight service from Hannover to Berlin.

He said: “It is an honour to represent my fellow In-Pensioners today – cheese has always been an important part of our diet and we are always happy to receive this generous, and delicious, Christmas gift. The military is known for its traditions, but this is one of my favourites.”