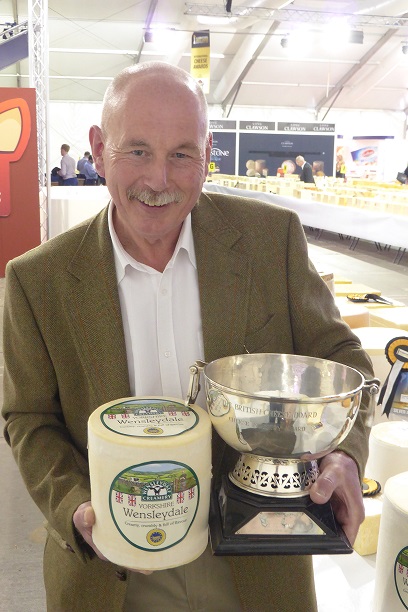 Yesterday, the British Cheese Board awarded the prestigious Nantwich Show Cheese Industry Award to Norman McCallum, a cheese industry veteran of 30 years from Hawes and cheese grader at The Wensleydale Creamery.

Now in its seventh year, the annual award recognises an individual who has made an outstanding contribution to the cheese industry in the areas of cheese making, grading or quality control. Typically, this is awarded to a person who is not in the public eye but whose peers and colleagues would endorse as someone who has made his or her mark on the British cheese industry.

“It is an honour to be awarded with this accolade. I feel very privileged to have been recognised in this way and that I’ve had the chance to work and develop within an industry that I feel so passionately about.”

Nigel White, Secretary of the British Cheese Board, who presented the award said:

“It gives me great pleasure to present this year’s Nantwich Show Cheese Industry Award to Norman. He has made a significant contribution to the British cheese industry over the past 25 years, something which we are delighted to recognise with this award.

“Norman is well respected and liked by colleagues and customers at The Wensleydale Creamery, but is often one to shy away from the limelight and underestimate the esteem in which he is held by his peers. He is truly committed to maintaining and improving quality through process development and researching new methods and techniques, with his team commenting that he has ‘Yorkshire Wensleydale running through his veins’. We are therefore pleased to highlight with this award what a great ambassador Norman is for the cheese industry and a true inspiration to all of us.”

Norman started work in the industry in 1983 in various roles within the Hawes Creamery. On its closure, he moved to Settle Creamery briefly before moving back to Hawes after its management buy-out in a middle management role. He quickly moved into the grading area where his keen eye for quality and his close relationship with the cheese making team has all helped Wensleydale Creamery to grow. Cheese isn’t just a passion for Norman, it’s actually a bit of a family affair, as his wife Sandra also works at the Creamery – along with her sister, brother and sister-in-law.